When schools continue to exclude, can education reduce caste discrimination in India?

27% of the Indian population claims openly to practice untouchability. Education is the solution. Read more http://bit.ly/1bLz0yv

National Sample Survey Organisation (NSSO) data on education covering  a sample of almost half a million people across the country shows that in the richest expenditure class, for every person who could not read, there were two who were graduates or above.

At the same time, for the poorest class, for every person who was a graduate or above, there were 127 who could not read. NSSO also found that the proportion of educated persons (those with secondary level education and above), increases eight times between the lowest and the highest expenditure class for India as shown in Figure 1. 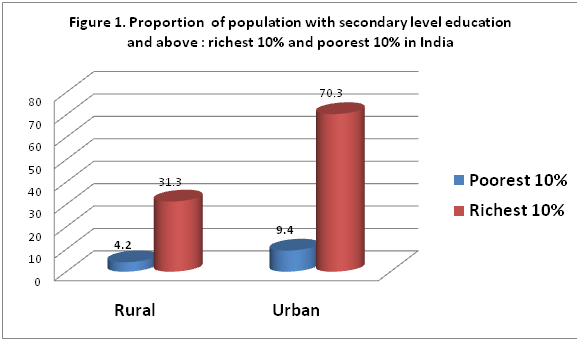 Untouchability is not a thing of the past

Poverty in India is intertwined with caste-based exclusion. Praful Bidwai points out that many from the upper strata of India’s caste ladder practice untouchability -- what he calls as casteism’s most obnoxious aspect -- which regards “lower” castes as too “polluted” to be allowed even into one’s house.

Much of India’s poverty is concentrated among social groups which are excluded from the mainstream through systematic discrimination.

India Human Development Survey (IHDS) of 2011-12 covering  42,152 households across the country had shown that 27% of the Indian population claims openly to practice untouchability (30% of rural and 20% of urban households).  Caste-wise disaggregation of these households reveals an interesting picture.  While the spread is across the whole social spectrum, the “higher” castes comprise the majority of households who practice it. (Figure 2).

Education is indeed a tool of social transformation. However, the stranglehold of caste-discrimination makes this process a slow and difficult one. Official data indicate that across India, four out of five female teachers and three out of four male teachers belong to the three caste groups where practice of untouchability is the highest – Brahmin, forward castes and other backward classes.

There are instances where teachers discourage hard work among Dalit and Adivasi (Tribal) students, either unfairly stereotyping them as beneficiaries of reservations or questioning the value of education for such children -- who they presume will only undertake menial, traditional, caste-based occupations later in life.

The social transformation agenda of Indian education system has scope for radical improvement.

Discrimination within educational institutions keeps many students out of it, or affects their performance within.

Poorer children are shown to have lower educational participation indicators, and it follows that a higher proportion is out of school. Marginalised households including Dalit, Adivasi, Muslim and female-headed households, and households with persons with disabilities are vulnerable to educational exclusion due to impacts of poverty. 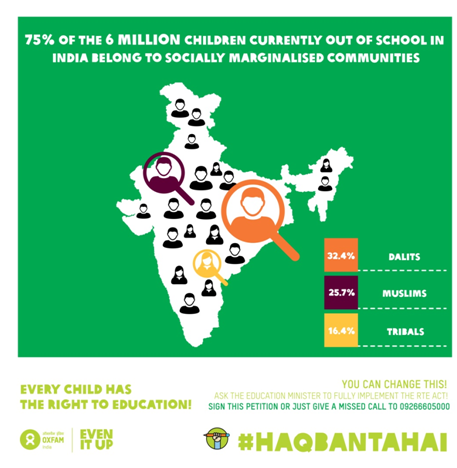 While discussing the generally underdeveloped nature of our society and polity, many present explosive economic growth as India’s magic bullet, which will solve all our problems including social evils. However, this is often in spite of available evidence.

For example, between Brahmin households where the highest educational qualification was classes 1-4, and Brahmin households with graduates, practice of untouchability fell by a significant 24 percentage points.  This seems to be the case of Indian states as well – Bihar which spends on education around $100 per pupil had one in every two households practicing untouchability, and Kerala which spent $685 per pupil had one in 50!

It is clear that the magic bullet, if any, will have to be transformative education for India, and not single-minded economic growth.  The ‘benign neglect’ of school education post-independence has adversely impacted the well-being of generations of Indians, and we do not have much time at hand.

School education in India is a major site of class and caste struggle – where the poor from marginalised social categories inch towards a future of justice, prosperity and equity, with great difficulty.  How we shape our educational system is the key to how fast we can emerge as a modern, developed nation.