Reflections from Kathmandu by John Bevan, a friend and former UN official who has worked in Haiti – before and after the 2010 nepal_earthquake, as well as Nepal (2003/4 and 2006/7). This piece does not represent Oxfam’s official views, but offers a fascinating insight into what is likely to happen next.

Today is day four of the emergency and the search and rescue period, at least in Kathmandu, is past its peak. Yesterday I went to the minaret style lookout tourist tower where quite a few people died—there was no sign of anyone still doing search and rescue, SandR as we know it here. Clearly there has been little, probably no SandR in rural areas where it is most needed and few rapid assessments.

My personal assessment is that in Kathmandu the damage has been cruel but relatively limited compared to the devastation of Port au Prince in 2010, which of course is not a very useful reference point as it was such an exceptional event. Government figures suggest that almost half of the reported 6,000 victims are from the Kathmandu valley and maybe one or two of the most affected districts. It is not yet clear what the total toll is. It is unfortunate that the media have been concentrating on the dramatic impact on temples and other religious building as this gives a distorted image of the situation. Remarkably few modern, concrete, buildings have been affected in the capital. In the countryside, however, most buildings are old, made of mud or weak bricks and stand on vertiginous slopes. These are the remote hill villages which it would appear have borne the main brunt of the quake, at least according to government statements.

The immediate problem I see is the dearth of rapid assessments in the hill villages, on which of course all action and prioritization depends. To be fair, this is no easy task in this event as I understand that the fault is about 150 km long, in nice terrain for trekking but very difficult areas to track. I am told that this is the pre-planting season in the hills so there is an urgent need to support the peasants to avoid the loss of a whole season’s crop. This would obviously lead to great problems for these food-deficient smallholder farmers. An additional consequence could be an intensification of the already strong urban drift.

For reasons described below, an important measure in ensuring the relief and then reconstruction are effective, just and transparent is the involvement from the start of renowned figures from civil society with the credibility to provide trustworthy oversight of the use of funds—this cannot be left to a conclave of state officials and their party bosses and colleagues.

Now is also the time to have a serious think about the medium-term. A single sentence characterization of the current political set-up in Nepal would be something like: high level of political party membership and influence with each party vying for power through support based on patronage networks, nepotism and cronyism in parties which are almost all led by traditional elites and their loyalty networks. Such political polarization and petty power struggles are antithetical to a decent reconstruction effort.

A careful comparison should be made of the aid disbursement mechanisms set up to ‘guarantee good governance’ with what nepal earthquake 3happened to donor funds post the January 2010 Haiti earthquake. It looked good on paper but was dogged by disputes, largely with Haitians feeling excluded and unheard. It did not survive the 2010/11 elections and change of government. It proved slow and clunky; financial oversight was so extreme that it effectively disabled the mechanism and even then there are many accusations of favouritism in the award of contracts.

This is the context, which is easier to describe than to remedy. At this point, maintaining “systems” and doing “business as usual”, but just a bit faster and better, are seen as massive net positives, demonstrating to the population that the bureaucracy and state are still running etc. It is debatable if they demonstrate any such thing – anger is already building in parts of Kathmandu and in some hill villages which it has been possible to contact, where populations feel ignored, feel that there IS no government they can see, to say nothing of the very badly affected districts, from where the true picture has barely begun emerging– but the urge, in the name of strategic planning, is to huddle, reinforce old behaviours and say that emergencies are not the time for reform. 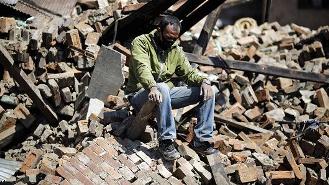 One key factor is the conflation of the term ‘independent’ with the term ‘all party’.

Donors should be aware that broad party involvement should not be confused with representativeness. Exemplary of this is the naming by the political parties of place-people to statutory bodies including the national human rights commission and the recently-named Truth and Reconciliation Commission. This way of negotiating political patronage networks and influence leads to a discrediting of such bodies, which are not perceived as legitimate or independent, given how often candidates are perceived to be named as a political reward rather than on merit.

Coordination of the multiplicity of relief efforts is essential, as is not weakening the government further, ensuring lack of duplication and parity of coverage, streamlining operations etc. But this cannot be conflated with what have become policy positions for the Finance and Home Ministries: to exert full Government of Nepal control, with all the implications spelled out above, over all national and international funding; and to attempt to micro manage what international agencies can do, and where and when they can do it, again with all the implications spelled out above and below for patronage, graft and inefficient and unfairly balanced reconstruction efforts.