A resplendent Gateway of India served as the backdrop for the opening ceremony of the 20th JIO MAMI Mumbai Film Festival with Star. Red carpet dazzled with thespian talents like Kalki Koechlin, Tabu and filmdom celebs like Dia Mirza, Diana Penty, Aamir Khan, Kunal Kapoor, Dulquer Salman amongst others. This was the perfect platform for Oxfam India to talk about Cinema Beyond Stereotypes- challenging filmmakers, producers and artists to create cinema that breaks stereotypical portrayal of male and female characters in films.

Here is how violence against women and girls is glorified on-screen
When our much-watched Bollywood films show the large-than-life male hero following the female lead trying to win her affections, it glorifies stalking as a form of violence. This is seldom understood by the audience. The fact that in the end after much persistent perusal of the female lead, she falls in love with the hero, seen as the epitome of love, is actually masking the lack of respect to her ‘no’.

The cracking of jokes on women and other non-conforming genders who dare to break the norms on sexuality, consent and love to the rampant objectification of women through the ‘item’ numbers in movies, the gender stereotypes are many, subtle and insidious to the lived realities of women and girls in both rural and urban India. (Oxfam India conducted a study on films as a medium to challenge gender roles and stereotypes. Read the report here.)

Challenging and changing the existing social norms
A major lesson from Oxfam’s long history of supporting women and girls to overcome violence is this urgent need to bring about a new normal where violence is regarded as just that…violence! For this shift, encouraging ordinary women and men to change without commensurate changes in the overarching mediums of societal fabric would be futile.

Hence, the way films are made and the way they are watched needs a simultaneous alteration. So while we plough away at young people’s individual perceptions, attitudes and takeaways from watching movies, Oxfam’s Best Film on Gender Equality Award is an attempt to modify the way films are made.

And this, much to our delight we had eight films made by male directors which were shortlisted for the Award. The shortlisted films were Marathi film 'Imago' (directed by Karan Chavan), Vikram Patil that tells the story of a shy, teenage girl battling leucoderma and the social stigma around it; to 'Hamid' (directed by Aijaz Khan) that explores the two sides of the Kashmir conflict through the eyes of an 8-year-old boy; Bengali film 'Jonaki' (directed by Aditya Vikram Sengupta) that explores an 80-year-old woman's search for love are on the list; ‘Soni’ a Hindi film directed by Ivan Ayr which chronicles the struggles of two policewomen in fighting crimes against women; ‘Jaoon Kahan Bata Ae Dil’ (directed by Aadish Keluskar) talks about a realistic portrayal of relationships in the modern world; ‘Light In The Room’ (‘Ottamuri Velicham’) directed by Rahul Riji Nair talks about the journey of a woman facing marital rape; Kannada film ‘Nathicharami’ directed by Mansore, which talks about a young woman’s tussles with the sexual taboos after losing her husband and ‘Sivaranjani And Two Other Women’ (Sivaranjaniyum innum sila pengalum), a Tamil film directed by Vasanth S Sai portrays the micro awakenings of identity, space and self-worth within family dynamics, early marriage and pregnancy. Do watch these norm-breaking films if you ever get the chance.

The jury that selected the movie to have won this Award this year were all illustrious women who have been associated with film-making for many years – Rima Das (who incidentally won this Award last year for the film that goes to the Oscars this year), Anjali Menon, the well-known director in the Malayalam film industry and Fatma Al Remaihi the CEO of the Doha Film Institute. 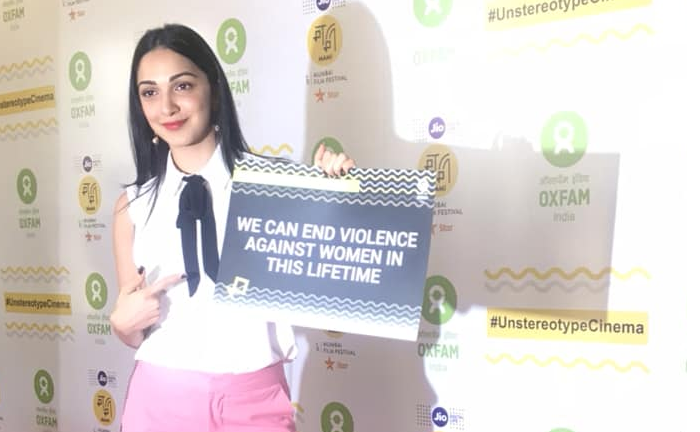 Recognising agents of change
It may not be enough to recognise film makers but also to get the whole industry to talk about the issue. Of course, this year it was much more vital as the revelations under the #MeToo movement have shaken many unfounded biases and assumptions. We also co-hosted the 'Women in Film' Brunch to get the bigwigs of the film industry to celebrate and commit to bringing about the much needed changes in the film industry. The Brunch was attended by leading female actors, directors, screenwriters and other industry professionals. The difference this year was the much needed participation of the men from the film industry.

We invited a young gender-champion Naaz Parveen from Patna, Biharas a special guest. Naaz is a young Muslim girl who is not only a community leader but also the goalkeeper of an all girl’s football team, the Ambedkar Football Club. Naaz fought patriarchy, child marriage in her community and created awareness along with local NGOs about sexual reproductive rights in her community.

Sharing her inspiring story at the Brunch, the ever-so-confident and beaming Naaz said that it felt wonderful to be sharing her story in front of stars that she has only seen on the screen. According to Naaz, football was liberating and gave her the freedom to be the girl standing before them all, inspiring other girls in her community to follow their dreams and stand against child marriage by saving many girls from being married at a young age. The simplicity yet the momentous nature of her story had an immediate connect with the celebrities who have not been exposed to such pangs of empowerment.

We believe that this is the moment when we should be give meaning to the dialogues that we have heard in the ultimate movie – DDLJ (Dilwale Dulhania Le Jayenge) - ja Simran ja, je le apni zindagi (Go Simran go, live your life). And for this life to be meaningful to all the Simrans of India, we need to bring the collective power of the 1.3 billion to think, act and promote a new normal. Let the credo be ‘Bano Nayi Soch: Buno Hinsa Mukt Rishtey’!

Wait! Wait! Don’t you want to know which film won the Award? Well, the Award went to ‘Soni’  while ‘Sivaranjani and Two Other Women’ and ‘Jonaki’ won a special mention.