“What do you like the most, Umra,” I asked her.

After a pause she added, “Sometimes my father gets me apples from the railway station without my even asking for it.”

Umra Salmani is 10 years old and Arif, her brother is 8. 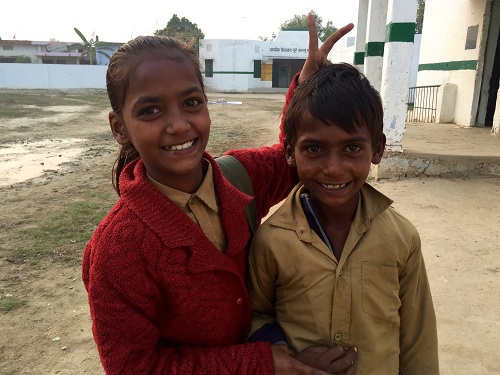 Umra Salmani with her bother Arif

“I know multiplication tables,” Arif said to us.

Arif was unstoppable. He crossed 10 and continued breathlessly upto the multiplication tables of 11 and 12, as if he was repeating a chant he had heard every day.

What stayed with us long after we had returned home from Raebareli was the laughter and bonding of the children of Poore Kallu Primary School. We had witnessed joie de vivre. 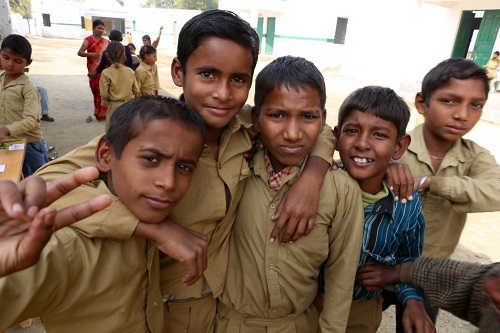 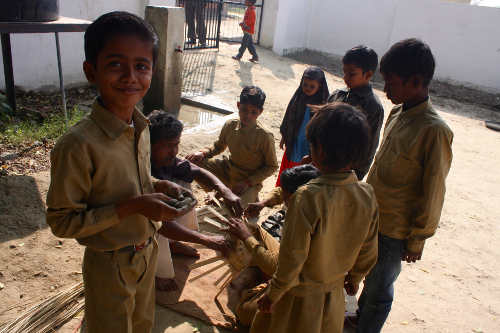 Children learn through experience and from doing things on their own

Most of these pre-teen children from working class families living in the suburb of Raebareli are diligent workers at home. Ankit sits in the family-owned corner shop after he returns from school and helps to fold and paste paper bags. Iqra cooks and cleans because her mother is too ill to manage chores. Nancy lives with and helps her aunt who is a tailor. Shahnawaz works in his father’s garage. Umra and Arif are latchkey children. They return from school to an empty home and often sleep before their father returns from work as a truck mechanic from the highway. Neither of them remembers what their mother looked like. They eat what their father, Mansoor Ahmed, cooks for them before leaving for work. 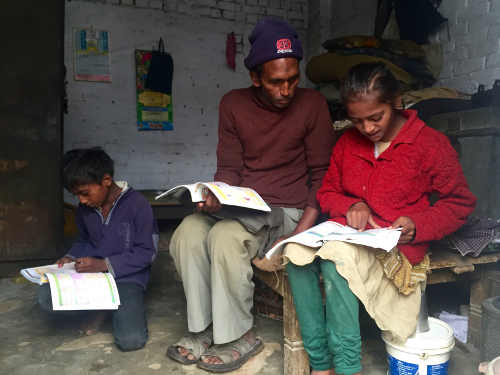 Umra Salmani and Arif study at home at with their father, Mansoor Ahmed

When we arrived to film a documentary at the government-run Primary School in this suburban neighborhood of Raebareli, there was only one teacher in the school for over a 120 students. In the week that we were there, mid-day meals were not being cooked. Kitchen supplies had run out. Most children had nothing to eat between 9am and 4pm. Like many other children, Umra and Arif had been attending school with nothing but a breakfast of biscuits and bread dipped in tea. 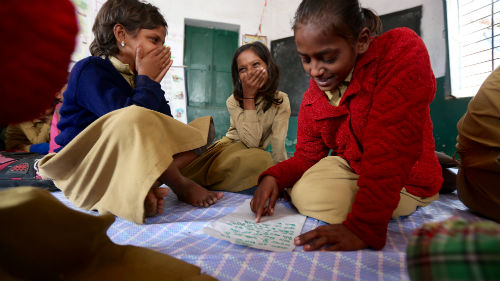 Yet, despite the lack of resources and poverty in their homes, there is an electric energy on the dusty campus of their neighborhood school. The government-run Poore Kallu Primary School is one of the 100 schools supported by Lokmitra, an organization working to improve elementary school education for children from underprivileged communities. 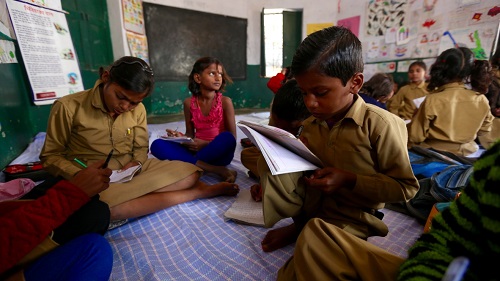 School is freedom for these children. School is where they express themselves. They teach and nurture each other

Lokmitra has been funded and supported in its work at the grassroots level by Oxfam India. “Oxfam India believes that access to quality public education has the power to transform societies and reduce inequalities by empowering people from marginalized communities,” shares Farrukh Rahman Khan who is the Essential Services Lead in the rights-based organization. “Our focus is specially on women and girls to claim their rights and to grow up and hold their governments to account,” he adds. 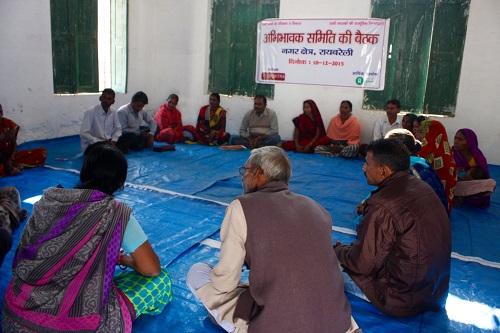 A day at Umra’s school often begins with student members of the Bal Manch (Students Councill) walking into the neighbourhood with a list of children who are absent. Lokmitra’s Vandana Devi accompanies them. Over the years, there has been sustained intervention by Oxfam India and Lokmitra to work with communities and government-run schools to create linkages and enable communication between the parents, teachers, students and state-level policy makers. They help children to attend school regularly, support teachers in classrooms by introducing teaching tools and techniques and collectivize parents to become influencers in the system. 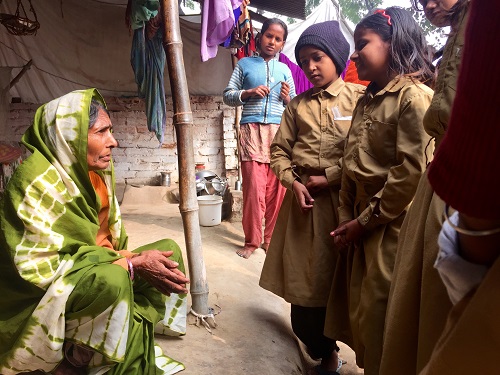 Student members of the Bal Manch (Students Councill) go into the neighbourhood with a list of children who are absent.

Till additional teachers are appointed to this school, Lokmitra’s Vandana will teach in class and organize activities for the children, supporting the lone teacher, Suman Devi in her job. 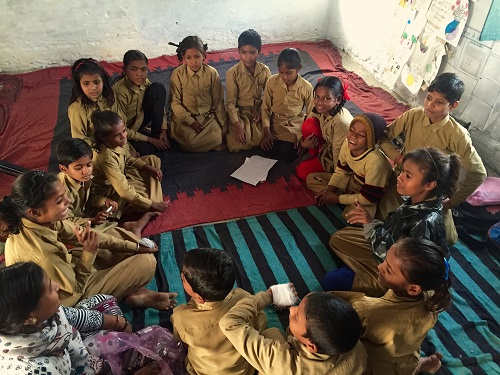 A Bal Manch meeting always starts with the students spelling out the basic rights of children.

The meeting was moderated by Vandana Devi and Sanjay Pal of Lokmitra. 3 topics were foremost on the minds of the children. There was no running water in the toilet, mid-day meals were not being cooked and there was stagnant water in the school playground. They wrote an application to the local Councillor and later walked across from their school to submit it. Brijrani, the elected Councillor was stitching clothes in her shop when the children arrived. She listened to their demands, received the application, and put an official stamp on the receipt. 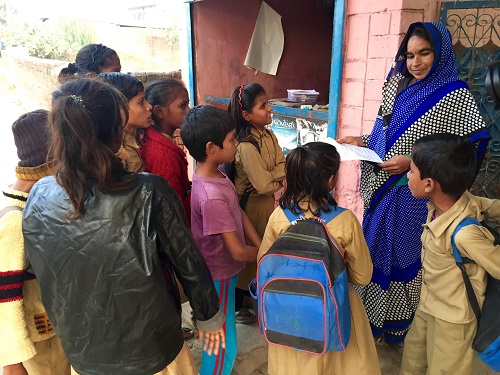 Students submit a written application to the elected Councillor, Brijrani, with a list of urgent demands for the functioning of their school.

The next day, the headmistress of the school, Suman Devi, ensured that a mid-day meal was cooked and served to all the children.

It was also a special school day for other reasons. Students arrived to discover the preparations for Gyan Mela, a knowledge festival. Instead of regular classes, the morning would be dedicated to observing and learning skills from local craftspeople, artisans and experts. Learning has come out of the classroom, under the wide sky outside. 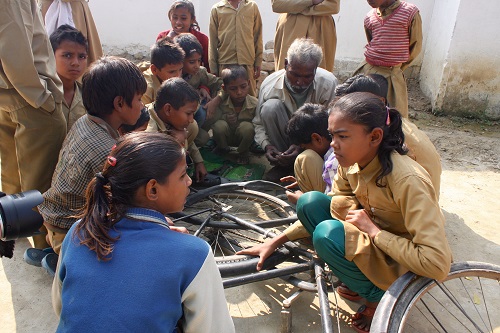 The bicycle mechanic is very popular with students learning how to repair punctures in tubes.

A bicycle mechanic has arranged his tools and excited children are trying their hand at fixing punctures in tubes and making other minor repairs. A potter demonstrates his skill before letting the children experience the joy of creating things with clay in their own hands. One of the parents is teaching a group of children how to fold and create paper bags from used newspapers and home-made glue. An Ayurveda expert and healer is talking about the myriad uses of locally found plants and their useful parts. The teachers crowd around him to hear the benefits of aloe vera, neem, dambel, etc. Other children are observing the creation of a basket from bamboo shavings and the weaving of a chair by deft, expert hands. 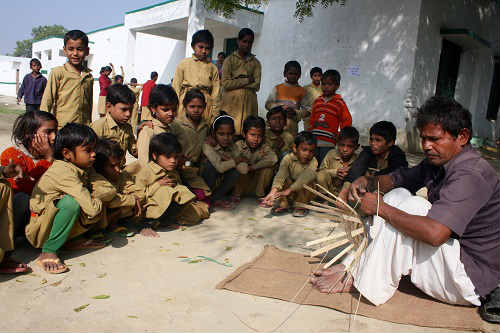 At a Gyan Mela, the morning is dedicated to learning skills from local craftspeople, artisans and experts 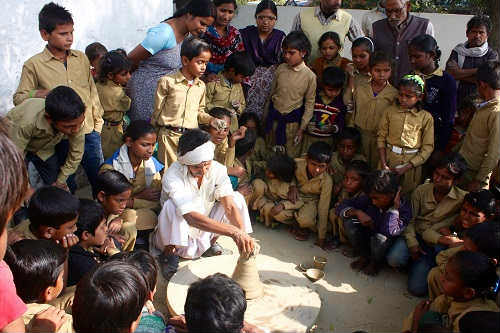 Photo Caption - A potter demonstrates his skill before letting the children experience the joy of creating things with clay in their own hands.

Children learn through experience and from doing things on their own. They bond with each other and these spaces where their imagination is allowed to flourish. There is joy associated with creativity. 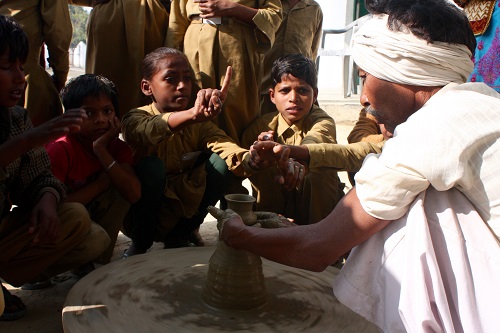 School is freedom for these children. School is where they express themselves. They teach and nurture each other. In school they have discovered that they have rights. They can ask for them without fear. They are reassured that their lives matter. 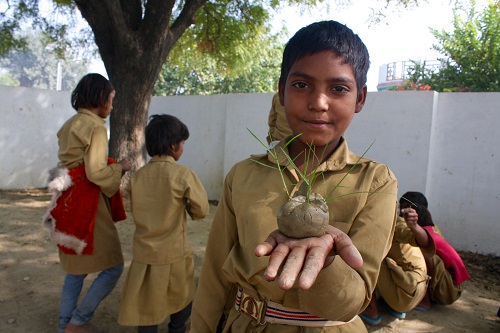 Learning has come out of the classroom, under the wide sky outside

“We believe that it is the state’s responsibility to provide quality education to all citizens,” said Lokmitra’s Rajesh. “The biggest hurdle is not a lack of infrastructure; it is a lack of accountability. We decided to devote our energies towards making the system accountable. Towards supporting children and their families, and to enhance the quality of education imparted. The quality grant that we received from Oxfam India has enabled and supported our work.” 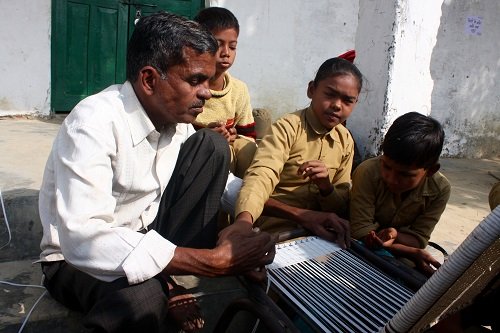 At a Gyan Mela, an artisan demonstrates the weaving of a chair

Children like Umra and Arif are direct beneficiaries of the bridges built when a healthy dialogue takes place between the community and systems that are meant to support them. They were spotted by Sharda Devi, who is the President of the School Management Committee. Along with Vandana, Sharda met Mansoor Ahmed and persuaded him to send his children to school every day. They spoke to the teachers in school to allow Umra and Arif to attend class even if they came late. 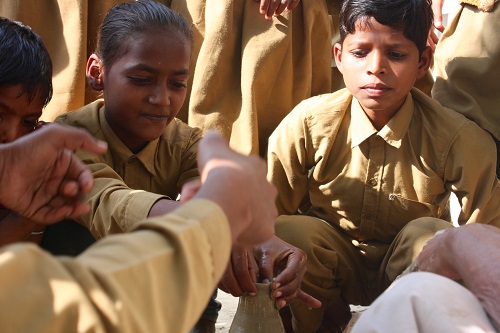 There is joy associated with creativity

Umra was a child without a voice when she had joined school 2 years ago. Today she is a Bal Manch leader, counseling other parents to send their children to school regularly. She is Arif’s role model. The children have received permission from the larger community to grow and flourish. 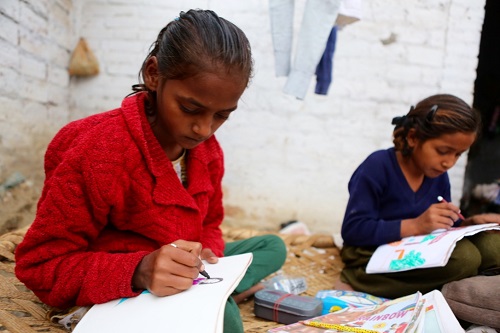 Children are reassured that their lives matter

Umra sits for hours together and draws and paints. Arif showed us her drawing book with pride. “You will find fairies and peacocks in this. Look, this is the school with a water tank and mosque next to it,” he showed us. Umra’s best friends are Nancy, Pooja, Iqra and Rabia. On some days they play badminton together in school. 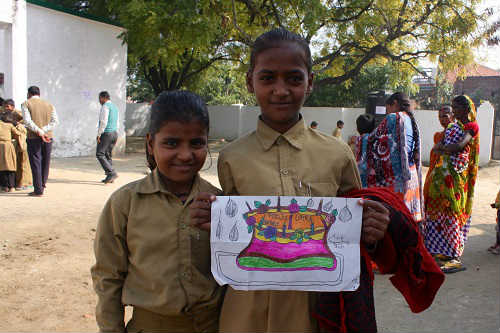 “We know we have come a long way in connecting the underprivileged with those in power,” shares Priya Bharti. “At an emotional level, it often feels like we haven’t achieved much. But when we look at the faces of children, their smiles replenish our energy once again.” 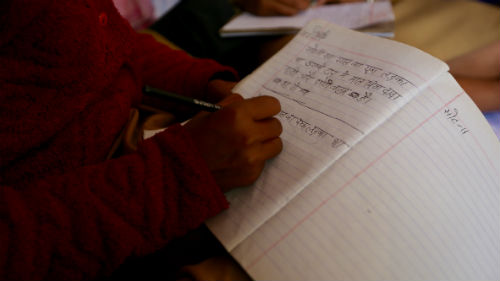 These are the real stories of people who are pieces of the puzzle that is our whole. Each one of us has the power to become part of the change, to connect with the stories of children like Umra and Arif who are the building blocks of India’s future. 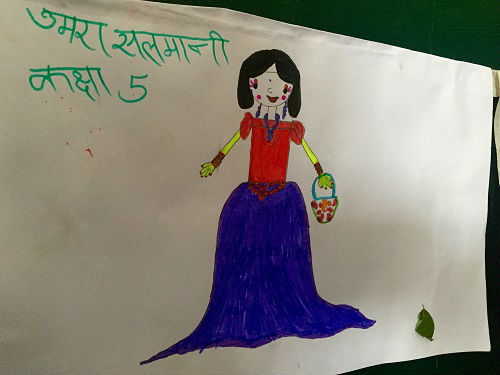 Umra sits for hours together and draws and paints

60 lakh children in India still don’t have access to schools. Empower another Umra and children like her. Support Oxfam India. 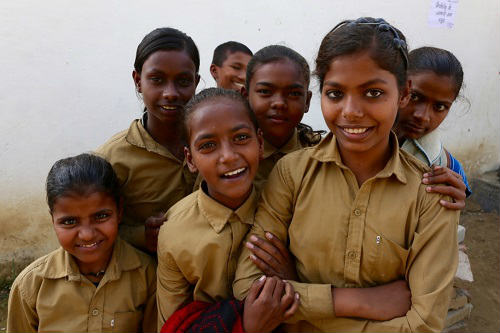 ~A short version of this article was first published in Mint Lounge, with the headline, “Children have the right to jump”