Oxfam is on the ground in #Cuddalore providing dry food to the worst affected areas. http://bit.ly/Tamil-Nadu-Floods

Oxfam completes debris removal at Koyambude, #Chennai, one of the worst affected slums in the city. http://bit.ly/Tamil-Nadu-Floods

India’s fourth largest and most populous city, Chennai, is faced the worst floods in over hundred years. More than 300 people lost their lives in the torrential downpour caused by deep depression in the Bay of Bengal. Release of water from a brimming reservoir further swamped the low lying areas of Chennai city. The flooding forced more than 200,000 people to abandon their homes. More than 3 million people were affected by the floods.

The capital city of Chennai has been particularly hard-hit, receiving its highest ever rainfall recorded in November in over a century. Release of water from a brimming reservoir has further swamped the low lying areas of Chennai city. 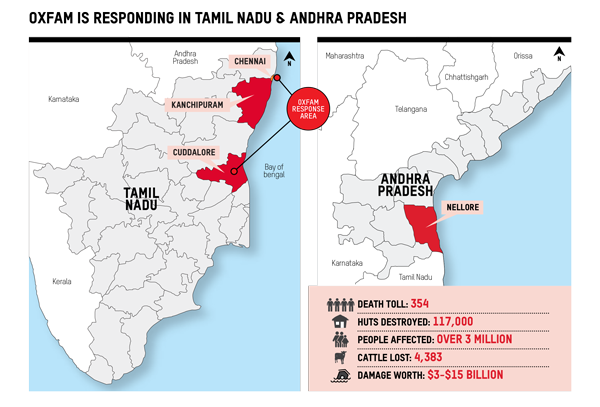 Besides Chennai, districts of Cuddalore, Kanchipuram, Thiruvalu, and Thanjavur were severely affected. The villages in these areas were marooned and completely inundated. There are currently 97 relief camps in Chennai city and 215 in Kanchipuram district. The neighbouring state of Andhra Pradesh lost 54 people to the disaster. The union territory of Puducherry saw nearly 400 houses suffer damage due to the disaster. Damages and losses amount to over INR 20000 crore (US$3 billion).

Oxfam is responding to the humanitarian needs of flood affected people in Tamil Nadu and Andhra Pradesh. Oxfam is assisting the flood ravaged communities with safer water, hygiene facilities, emergency shelter materials and giving cash assistance to the most vulnerable families. Thousands of people need humanitarian assistance—both in urban and rural areas of Tamil Nadu. Responding to the crisis now and for the next six months with local NGO partners, remains an Oxfam priority.

Oxfam has reached out to 35,000 people in Chennai, Cuddalore and Kanchipuram 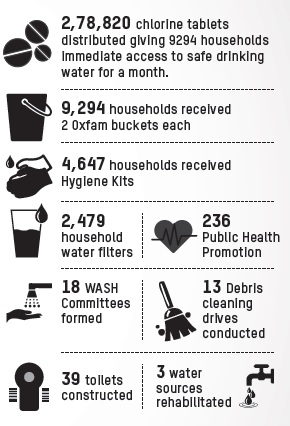 How you can help

Oxfam is aiming to reach 8,000 families or approximately 48,000 flood affected people in Tamil Nadu &  Andhra Pradesh. You can help us provide shelter, health promotion, water, sanitation and latrines, blankets and solar lamps and cash transfers. Click below to DONATE NOW: