Who is the future of India?

Jyoti Devi, a Std. V Dalit student, conducts a meeting in her capacity as the presidentof the Bal Panchayat in her primary school.

A large group of students are gathered under a Peepal tree in the middle of the school ground. This is a Bal Panchayat meeting in Village Bada Lewa in the interior of Hamirpur district, which lies between the rivers Betwa and Yamuna in the Bundelkhand area of Uttar Pradesh.

“Now that summer is here, we want all the fans to be checked in every classroom. Windows with broken glass panes need to be fixed,” says Jyoti Devi, a student of Class 6. Jyoti is the President of the Bal Panchayat and conducts this meeting with poise and authority. 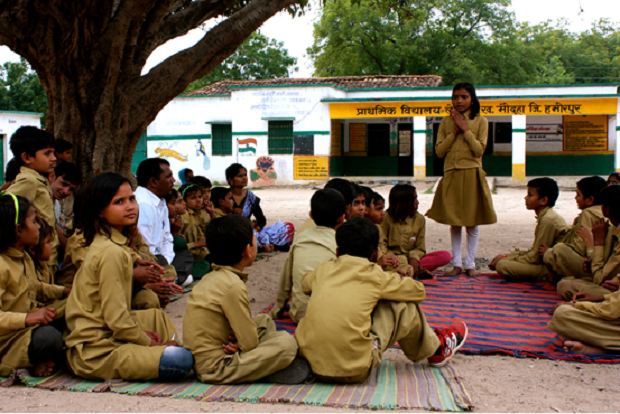 Other posts in the Bal Panchayat include Education Minister, Cleanliness Minister, Mid-day Meal Minister and Treasurer. The students make a list of infrastructural needs like a broken tap and a collapsed boundary wall that needs to be repaired. They remind their juniors to wash their utensils after the mid-day meal and make a line when they need to use the hand-pump. 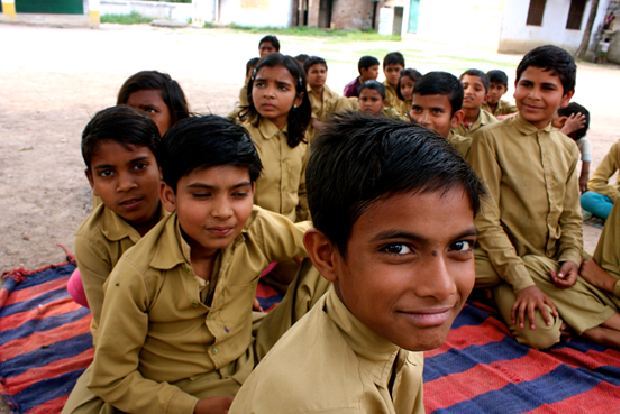 Aided by their teachers and trained in workshops conducted by Samarth Foundation and Oxfam, these children have found a space in which they can be assertive and articulate. Jyoti, Gomti, Dharam and other members of the Bal Panchayat have travelled to Lucknow to attend workshops where they have learnt how to set agendas and follow up issues when they conduct meetings. 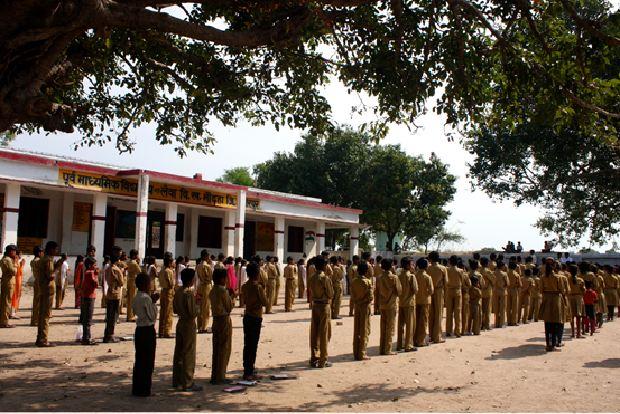 This government run Primary School in Hamirpur district is one of the 8% schools in India that comply with most of the norms and standards stipulated in the Right To Education Act. In an area that has been in the national news for increased farmer suicides, these children have emerged as RTE warriors who are learning about both their rights and responsibilities 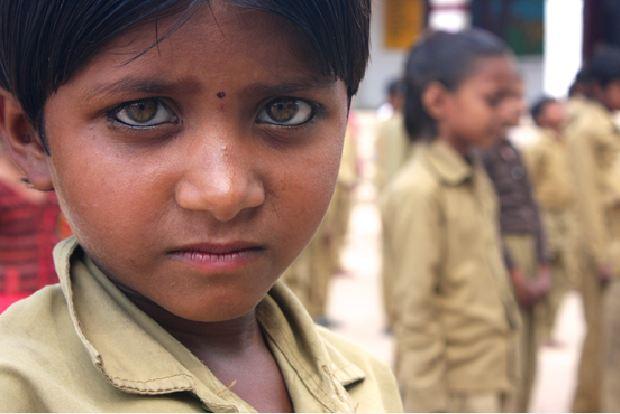 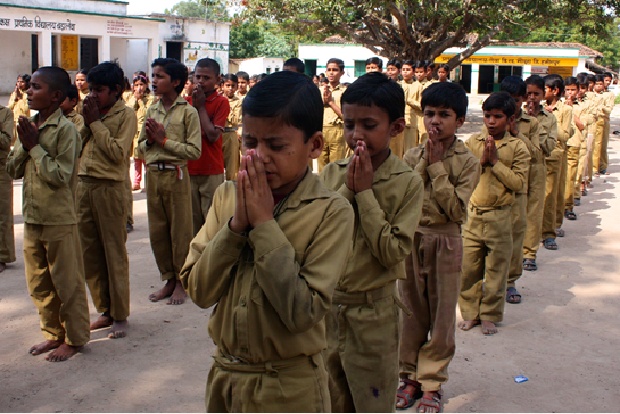 The RTE Act that came into being on 1st April 2010 advocates the fundamental right of children to free and compulsory education. It lays down detailed guidelines for the development of curriculum, training of teachers and pupil-teacher ratios. It emphasizes child friendly learning and an environment that is free of fear, trauma and anxiety for children. 5 years since the RTE Act came into being, only a fraction of its promise has been fulfilled across the country.

Even that fraction throws up impressive statistics. 110 million children in India are served meals in the Mid-day Meal scheme making it the world’s largest school feeding programme. 199 million children are in schools and studying. In Village Bada Lewa, children of all castes sit together as they are served a freshly cooked meal everyday. 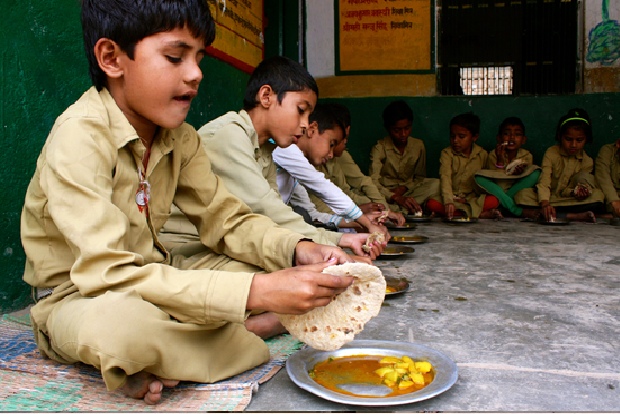 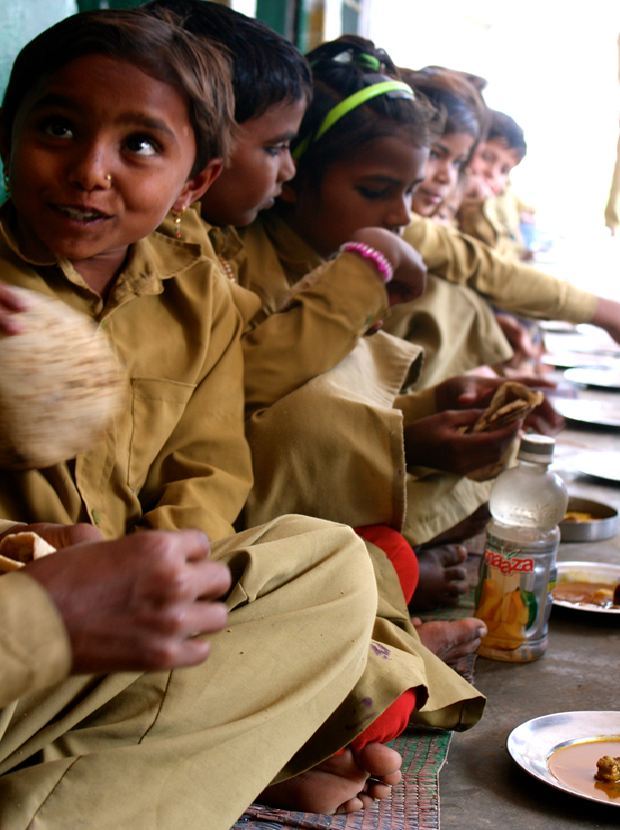 “Children who grow up eating and playing together are far more likely to see this as normal behaviour when they grow up. They are less conscious of caste divisions. Their Bal Panchayat meetings make them feel that they are a team who can assert their rights and choices together,” says Devendra Gandhi, who runs the NGO, Samarth Foundation in Hamirpur.

A typical week in this school starts with an activity they call ‘tracking.’ A group of Bal Panchayat members walk into their village during school hours, looking for children who are enrolled but have not been coming to school regularly. They will counsel the parents and the children to attend school regularly and offer support and solutions where required. The word ‘tracking’ is now part of their everyday vocabulary. 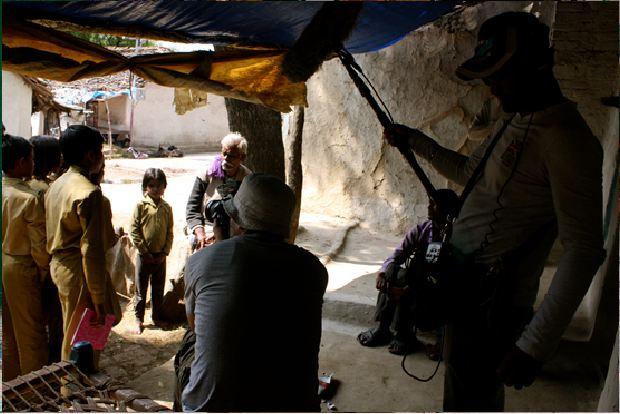 On one such tracking mission, Jyoti, Dharam, Gomti other members of their Bal Panchayat have a list of five absentee students whose homes they will visit. They run into 7-year-old Anjali, wearing her school shirt and balancing her younger sister on her hip. Jyoti takes the lead in confronting Anjali’s grandfather who is sitting in the verandah.

“Dadaji, why haven’t you sent Anjali to school today?”

“It is harvesting month,” he answers. “Anjali’s mother is away in the fields. She has to look after her younger sister.”

“Dadaji, Anjali will miss too much in school and then she won’t be able to catch up. Why don’t you handle the baby till the mother returns?”

“I can’t handle the baby,” he replies.

“You are our elder, Dadaji,” Jyoti reasons. “Anjali is still a small child. She needs to be regular in school. Please help her to go.”

“Whose child are you?” the old man asks, trying to place Jyoti.

She names her father. She tells him where her home is. Jyoti lives in the Dalit basti on the outskirts of her village with her mother, who is also the Safai Karamchari of this village. One of the boys in the group is patting the buffalo and running his fingers through its body hair as he participates in this exchange just by his presence.

Eventually the elderly man asks Anjali to run along to school. He nods approvingly at the children, who seem to be ushering in a new age in the village. 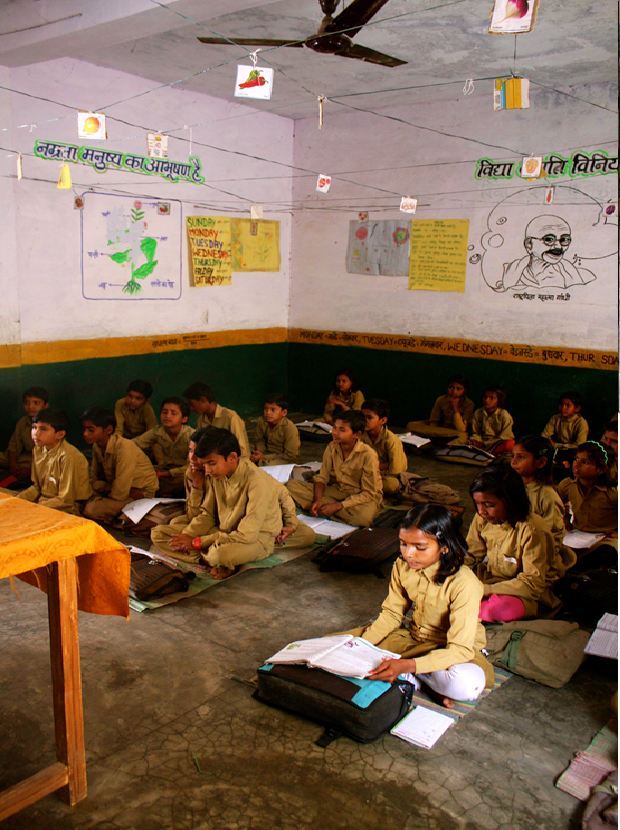 “Nobody would have recognized me or taken me seriously, if I tried to counsel the parents in this village,” says Vinay Kumar, who is a Project Co-ordinator with Samarth Foundation. “We try to create a link between government schemes and the people that they are meant for. It is the people’s own initiative that makes it a success.”

“Don’t even ask me about the time when I was studying in this school, says Gurudayal, who is the President of the School Management Committee in this village. 10 years ago, the Dalit teacher in the school was not even allowed to sit on a chair throughout the day. Times have changed dramatically now.” 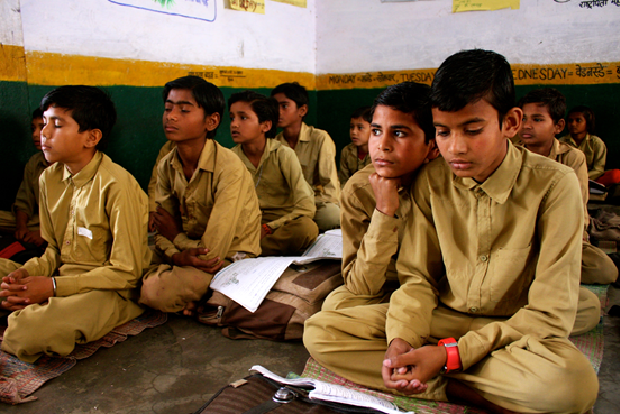 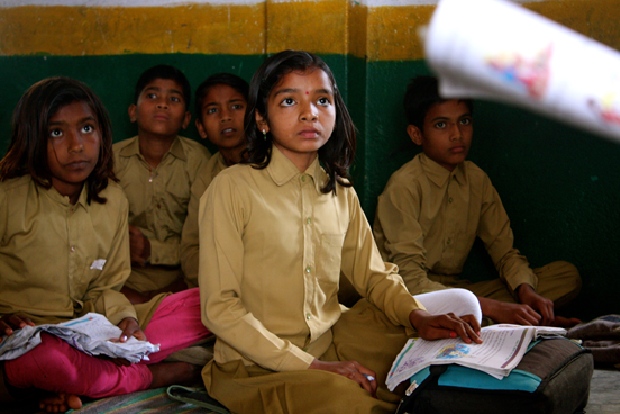 Some parents in this village have taken their children out of local private schools and enrolled them in the government school again. The attendance rate of the students has improved by over 40% since the children started the ‘tracking’ programme.

Spending time in the school and village of Bada Lewa inspires an optimism for the outcomes that are possible when parents, teachers, local authorities and non-government agencies come together on a small scale to invest in making quality education a reality for their own children.

The nationwide score card on implementing the RTE Act leaves much to be desired. 6 million children are still out of schools and 75% of them belong to Dalit, Tribal and Muslim communities. The most deprived and marginalized communities have received the least benefits. Half the children who enroll in schools still drop out before Class 10th. 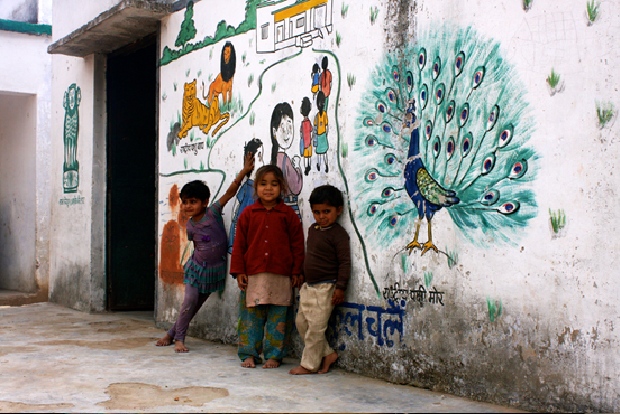 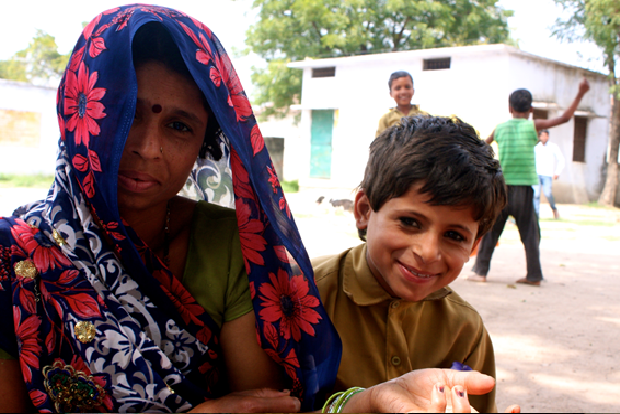 The RTE Act is substantial and well thought out but it needs the will of the state and sustained resources to be implemented to its full potential. The RTE warriors of Bada Lewa village in Hamirpur show us how empowering the benefits of the RTE Act can be. 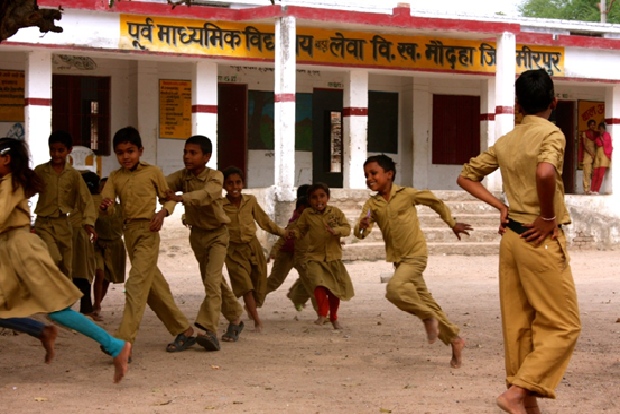 “We want our school to have a field of green grass like we see in schools on television,” says Jyoti Devi. 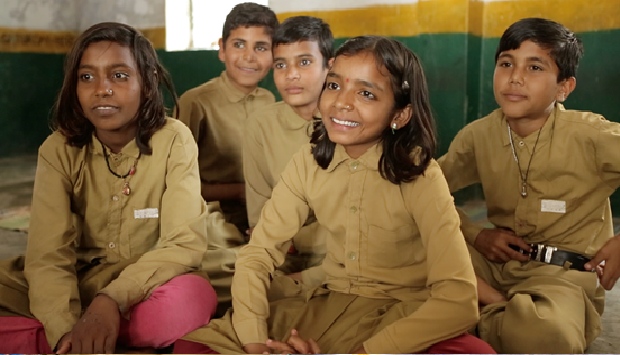 “Are you afraid to speak up before your teachers?”

“Yes, I am,” 12-year-old Dharam Singh speaks up first. After a pause, he adds, “But our teacher says, don’t be scared of me. I have no right to hurt you. I will not hurt you.”

Jyoti is the beacon of education in her village. But lakhs of children in India are yet to enter a school.

Help us create more Jyotis' to brighten the future of India.

~A version of this article has been published in The Hindu here: Leading from Within

~Another article on these students has been published in Mint Lounge here: Who is the future of India?